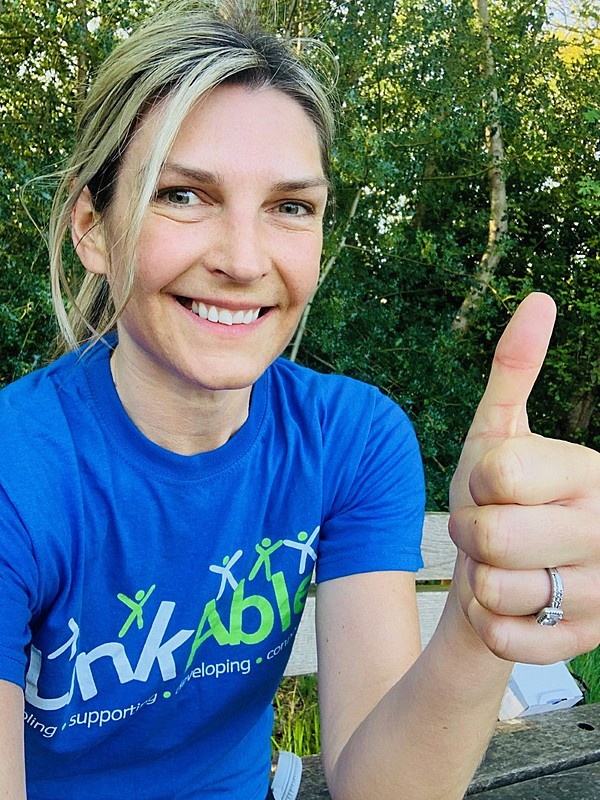 AROUND, AROUND THE GARDEN!

LOCAL MUM TAKING ON MARATHON IN HER GARDEN AS PART OF THE 2.6 CHALLENGE

This Sunday (26th April) Kim Owens, from Bisley, should have been taking on the iconic London Marathon to raise funds for LinkAble, a charity based in Woking that supports children and adults with learning disabilities. However, Kim’s hopes of taking part in the race, now in its 40th year, were dashed when the event was postponed until October due to the Coronavirus pandemic.

Undeterred and having spent the last four months training and raising funds towards her £4,000 fundraising target Kim felt that she still had to do something on the day of the race. Therefore, in support of LinkAble and as part of the nationwide campaign ‘The 2.6 Challenge’ she has decided to run the full distance (26.2 miles) in her garden.

Kim on why she is taking on the challenge, ‘It’s going to be blooming tough as my loop is only 160m so that’s 262 or so laps.  I’ve continued to train and really want to do the distance so this feels the most responsible way to take on the challenge. I am not expecting a personal best though, there are too many turns!’

On her motivations as to why she chose to run and fundraise for LinkAble. ‘As a mother of two young boys, one of whom has been diagnosed with autism, I know just how important it is to support local charities like LinkAble. Without them many families in a similar situation to me would struggle for support. By running this marathon and taking part in the London Marathon and now The 2.6 Challenge I can raise vital funds that will be spent locally as well as raise awareness of the great work that LinkAble does, much of which often goes unnoticed.’

Rhys Parker, Fundraising and Communications Manager for LinkAble, ‘From the first time I met Kim she has blown us all away with her commitment to not only her training, but her fundraising too. She is such a great advocate for LinkAble and we are so proud of what she has already achieved. I have no doubt that she will rise to the challenge this weekend and complete the marathon distance at home. Although, I may wait for a few days afterwards before reminding her that she will have to the real thing again in October!’

You can watch Kim's video below.