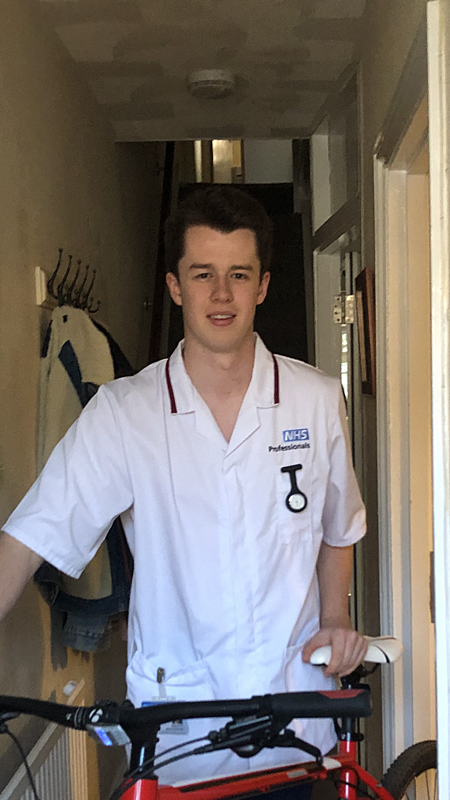 Following the outbreak of the Coronavirus pandemic fourth year medical student Sam Mckeown and LinkAble team member, saw his university hospital placement cancelled. Undeterred and wanting to do his bit Sam secured a Healthcare Assistant job at Southampton General Hospital last month. However, that was just the start of the story. Having completed his first shift he returned to find his bike had been stolen.

Sam who studied at RGS before starting his degree in medicine at Southampton University worked for local charity LinkAble, supporting children with learning disabilities during their holiday schemes for the last four years. News of the bike theft was posted on Facebook and got over 1,000 shares and someone who knows Sam from LinkAble set up a Crowdfund page which raised £500 in 24hours. He also got inundated with offers of bikes and accepted one from a stranger and bought a new lock and pump and donated the remaining £440 raised to LinkAble.

This is not the first time that Sam has donated to LinkAble. A few years ago he donated all of his summer pay back to the charity. His sister Emily also volunteered at the charities Saturday Play group when she was just 16 years old.

Talking about what happened Sam said "I just wanted to say that everyone was and has been so supportive about the bike and my work and really shows the positive side of everyone.  I thought of donating to LinkAble because of how much I’ve worked with them and the difference that they make to the lives of the children and families they support locally. The joy on the kids’ faces as they get to go on the trips and have fun with their friends is incredible".

Shirley Formby, HR Manager at LinkAble comments, ‘Sam has been a valuable member of the LinkAble team since 2016. It is typical of Sam to turn such a negative story into one with a happy ending, we are extremely grateful for the donation and would like to thank him and everyone who donated to his Crowdfund page.’

Sam has also had some good news as he has just been offered a new job as a Doctors assistant in Bournemouth which he starts next week and is very excited about.

Good luck Sam from everyone at LinkAble and thank you for your donation.